When we first took the decision to start an indie games studio our knowledge of the game creation process was limited, requiring us to take a flexible organic approach to design. In the very early stages of development we were often unsure if a particular concept we dreamed up was even possible, given the processing power or memory requirements of the featured envisaged. For us the learning process continued throughout the project, with a ‘dream up - research - learn - design - develop - dream up’ cycle becoming the pattern of production. It may have been foolhardy to take this approach but there is one often overlooked psychological reason this strategy was best for us at the time - motivation.

We needed to start rolling immediately or heaven knows if we could have summoned the energy to pick ourselves up and continue. 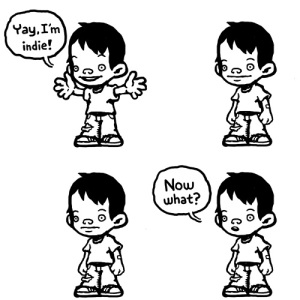 Our very first game concept took a big hit (a major player produced a very similar game concept) and we decided to abandon its production. We needed to get started on our second idea straight away, we needed to start rolling immediately or heaven knows if we could have summoned the energy to pick ourselves up and continue. We needed to see a result, something tangible, graphic, that we could interact with there and then to help us believe that it was worth continuing. And so we started with the flame, and worked through the dream - research - learn - design - develop cycle with this single aspect of our game concept.

But for a small team in need of motivation, it was what worked when nothing else could have seen us through.

And so we continued as we had started, researching as we went, learning as we coded, and designing as we learned, and because we had started, we couldn’t drop it now. Had we worked on animation or game development before, had we worked on iOS dev before, had we experience running a project from start to finish before, perhaps we could have taken a less maverick approach from an industry standard point of view, but for a small team in need of motivation, it was what worked when nothing else could have seen us through.